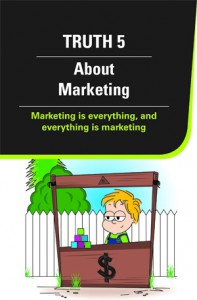 Kelvin realises that his bike shop has one great opportunity to carve out a niche for his bikeshop and build remarkable business.

Once upon a time… a long, long time ago in a country not unlike Australia…

Selling bicycles is not easy. There is so much competition as people can buy bikes at specialist bike shops or at big retail stores like Big W and Kmart, and, like everything else these days, you can even buy bikes over the internet.

Kelvin’s bike shop was doing ok but he was worried about the effects of both the big box retailers and all the online stores. Kelvin felt constant pressure to make his prices competitive, and knew that his repair work was suffering because customers would often ask him to just fit parts they had bought themselves online.

“How can I possibly turn the ship around?” asked Kelvin.

Working in The Bootcamp with me, Kelvin came to appreciate that it was imperative he change his whole approach to doing business. He realised that he could never out-compete the big retailers, and that fighting over the crumbs with his fellow suburban bike shops would be a disaster.

Looking into Kelvin’s options for revitalising his business we came across a quote from Chris Zane, a bike shop owner in America: “The only difference between our competitors and us is the service we provide.”

Kelvin realised the obvious truth of this statement.

He knew there was no difference between the bikes he was selling and those sold by his competitors. He knew they were all fishing in the same pool trying to catch the same limited number of fish, and that the only way forward was to create a new pond and attract enough of the fish away from the old pond to enjoy the fishing again.

It took a lot of courage, but he did it.

Working in The Bootcamp Kelvin developed a whole new approach to running his bike shop, an approach based on providing astounding service. Kelvin was determined that the service customers received in his shop would leave them surprised and delighted.

How did Kelvin do this? A number of great ways: he implemented a life-time free flat tire repair service, he offered a no-questions-asked replacement guarantee for all bikes and accessories for up to six months after purchase, and he taught his staff that from now on the word “No” was banned and no customer request could be refused.

Soon the word started spreading about Kelvin’s astounding service, and people would come into the store just to check it out. The place was buzzing most days, and the staff loved doing whatever they could to amaze their customers.

A couple of years later, Kelvin’s business has grown so much he has just moved to a new location three times as big. With his great service Kelvin has succeeded in creating a whole new fish pond.

And Kelvin lived happily ever after… The end.