Another thought about the Rhythm of business and how to make business as predictable as possible from Verne Harnish’ book: “Mastering The Rockefeller Habits”.

Verne says to have more meetings, not less.

Verne believes quarterly strategy meetings with your staff are not enough. You need to have a monthly, weekly and even daily schedule of meetings to ensure that the strategies and deliverables from the less frequent planning meetings are actually carried out.

I know that many management gurus would baulk at that statement, because the amount of money and time wasted in business in meetings is staggering.

But Verne is right. Strategies and plans without regular, formal and structured follow up meetings, never lead to the outcomes you’d hoped.

Do learn how to make your meetings super-efficient though (For example, I know of a company where all meetings are held standing up, so that the meetings don’t take a minute longer than absolutely necessary).

So you’ve got a great product or an awesome service but where are all your customers? Read on to see how Mark found his customers and sent his sales rocketing.

Once upon a time… a long, long time ago in a country not 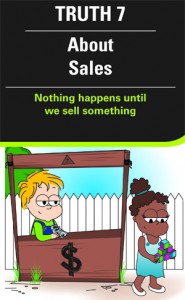 Mark was a graphic designer.

In fact he was a fantastic graphic designer. He had put together a small team of other passionate and inspired designers and together they created beautiful, eye-catching, ground-breaking designs. Yet despite his and his team’s talent, the work coming in was sporadic and the business was only just making ends meet.

Sometimes potential clients made enquiries about design work, and sometimes leads just walked in the door. Every now and then Mark made a few phone calls and sent out some emails prospecting for work, but this was only occasionally and usually just when the need for work was greatest.

The result of all this meant that sales were haphazard and work fluctuated wildly. One week the team would be flooded with new projects, the next everyone would be heading home early.

The stress of wondering if the business would survive each month was beginning to affect the quality of the work produced. Mark was finding his staff turnover was high because of the constant insecurity and worry.

Mark wondered, “How can I smooth out the peaks and troughs of work coming in?”

Working in The Bootcamp with me, Mark came to appreciate that he would need a consistent sales strategy and system if he wanted to build a healthy business. He came to see that the only way a business can grow is by making regular and consistent sales. Of all of the Ten Truths, Truth Number 7, that nothing happens until we sell something, really struck home with Mark.

So we got started developing a simple and manageable sales system, and worked on increasing the sales focus of both Mark and his staff. To turn things around Mark would need to not only implement the new sales system but to work consistently at it, week in, week out.

And he did… and it took a lot of courage.

Mark found an easy-to-use customer relationship management (CRM) system, that had great sales funnels and pipeline reports. Then he set targets for himself and his team for numbers of calls to make, emails to send out and proposals to write and follow up. Every week Mark and his team had a 20-minute structured sales meeting.

Very soon things started to turn around, and just three short months later Mark could see a difference. By the end of the financial year the business was at a completely new level.

Now, a couple of years later, Mark has a stable team of 10 designers whose talents are being fully utilised. The business has a great pipeline of work ahead, and Mark now knows with a certainty what his resources are and how much revenue and profit the business will generate in the next three to six months.

And Mark lived happily ever after… The end.